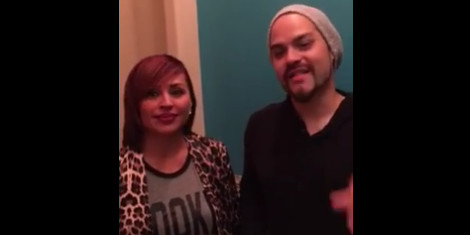 Elida and Lalo Reyna will be guest hosts on Univision Tejano station KXTN 107.5 on Monday, November 2, 2015, according to a recent Facebook post by the Tejano power couple.

The Reynas posted a video on Facebook announcing the gig Wednesday night.

“I’m super excited that we are going to be guest DJ’s on KXTN’s 107.5 this Monday,” said Elida, who recently won three trophies at the 35th Tejano Music Awards on October 24.

“That’s right, we’ll actually be on the air from 7 to 10, playing some of our favorite music,” Lalo added. “We’ll also be debuting our latest single ‘Adicta’.”

Lalo told TejanoMax.com, that the couple may post another video asking for fans’ help in naming their radio show.

KXTN recently made a programming change with their morning show as longtime host Jonny Ramirez was recently let go after 22 years with the station. Former KXTN personality Bigg Boyee has been brought back to host the morning show after spending eight months hosting mornings at Univision sister station Yo! 95.1.

TejanoNation has learned that Bigg Boyee will be taking vacation days every Monday until the end of the year, so is this just the beginning of celebrity guest hosts on Mondays for KXTN?

You can listen live to Elida and Lalo Reyna on KXTN 107.5 at KXTN.com or by downloading the free Uforia app.