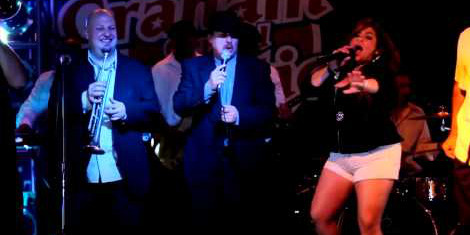 AUSTIN – If you’re feeling like some groovy Tex-Mex with a little salsa-cumbia rhythms added in, then make plans for a free show with Calle Seis at Blue Moon Bar & Grill in Austin on Thursday, July 2.  Also, set to perform at the recurring first Thursday’s event is Nikki Lopez and lots of special guests.

Calle Seis is a band made up from a bunch of musicians that have played together in other bands. Grammy winner Wild Bill Perkins (manager/trumpet) and Grammy winner Jess Lopez (vocals/drums/percussion) met playing for Little Joe Y La Familia, with whom Jess still tours with every weekend. Perkins currently tours with Ruben Ramos and the Mexican Revolution along with Grammy winner Rene Garcia (vocals/trombone) and Grammy winner Chris Rivera (vocals/drums). Grammy winner Mario Vigil (bass,keyboards) tours with Gary Hobbs on the weekends and to round out this all-star cast is legendary guitarist David Guzman (vocals/guitar), one of the best accordion players anywhere, 21-year-old JJ Olivarez (accordion) and the “Charranga King” Hugo Guerrero.

If you’re ready for a knock your socks off good time with music that will get you out on the dance floor and shake your booty, then head over to Blue Moon Bar & Grill at 2200 S. IH-35 at Oltorf every first Thursday of the month for a free show Calle Seis and special guests.