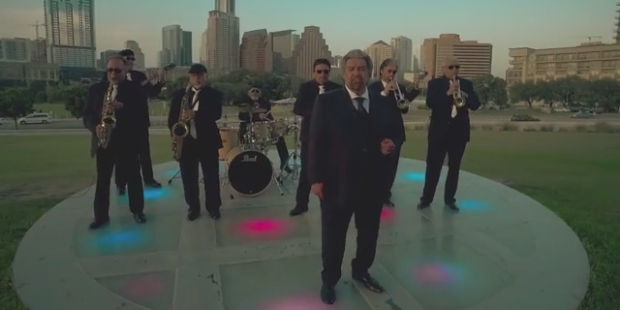 Legendary band Leonard Davila & Street People have returned with a brand new album and have released the official music video for their latest single, “La Cajera,” on Saturday.

The visual, produced by Lupe Moya of LM Media Solutions, features the band dressed in black suits performing with the Austin, Texas skyline in the background.

After a nearly 30-year hiatus, Davila has returned with a reinvigorated sound, part of a rebirth of the once-popular Street People band with their latest album, Rejuvenation, re-released in January on LTD Records. The album was originally released in 2015, the same year the Austin, Texas-based band was inducted into the Tejano R.O.O.T.S. Hall of Fame, but now it gets rejuvenated for 2018.

The new Street People still has a horn-driven sound but with modern arrangements and new tricks, Davila says. He hopes to show that their music can be enjoyed by people of diverse musical tastes. “You don’t have to listen to just one thing. You may not dance to the cumbia the same way that I do, but we all still move.”