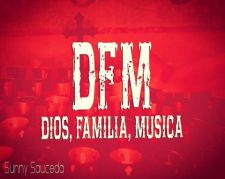 The two-time Grammy Awards winner wanted to release a track with a positive message after what the singer had experienced in the past couple of years.

“I wanted to put out a song with a positive message,” Sauceda told Tejano Nation. “I lost my dad about two years ago and then my son was born the following year. So, this single are three words that I live by…DIOS, FAMILIA, y MUSICA, all in that order.”

Songwriter Raul Sanchez took Sauceda’s concept and turned it into a beautiful song that Tejano music fans are sure to love.