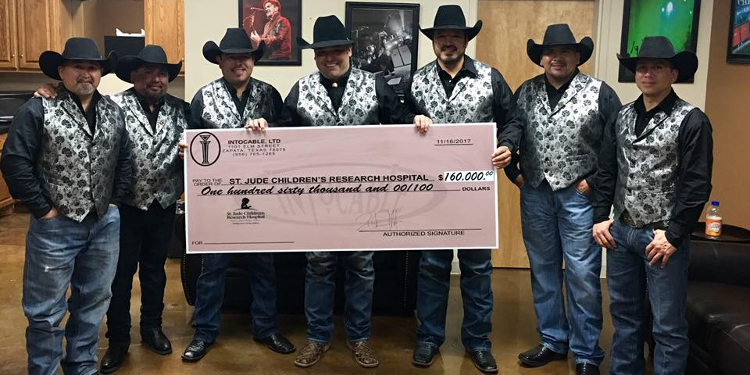 The band held a concert on November 16 at Cowboys Dance Hall with proceeds going to the hospital in Memphis, Tennessee, which focuses on the well being of children with with cancer.  The show also featured Michael Salgado, Stefani Montiel, Grupo Massore, Vision, Zamorales and Grupo Zaaz.

Intocable thanked all who attended and contributed to the event via Facebook, “GRACIAS SAN ANTONIO…We did it…Raised about $155k for St. Jude Children’s Research Hospital. We wanted to extend our gratitude to all who participated and donated time with us…Grupo Zaaz, Zamorales, Grupo Vision, Stefani Montiel, Massore, Michael Salgado, all the staff and crew and last but not least…ALL OF THE AMAZING FANS! Without you guys none of this would have been possible!!! Truly and incredible night.”

On January 2016, Intocable announced their partnership with St.Jude, a pledge first of its kind in the music industry. After witnessing firsthand the groundbreaking research done at St. Jude, Intocable knew they had to help the organization in any capacity possible.  Their support will not only create awareness for the cause, but their pledge of support will contribute to assure that families pay for nothing and can focus on letting their child live.

Intocable’s two decades career has put them at the forefront of the industry, while relentlessly defying industry standards. Their unique combination of Tejano, Norteño, pop and rock has earned them chart-topping hits, headlining spots on some of the world’s most renowned stages. They’ve won two GRAMMYs, have had two Latin GRAMMY wins and multiple nominations; as well as many Latin Billboards and two Billboard Regional Mexican awards, among many others. In 2010, Billboard magazine named them “Group of the Decade,” which was followed by a Lifetime Achievement award from Billboard.