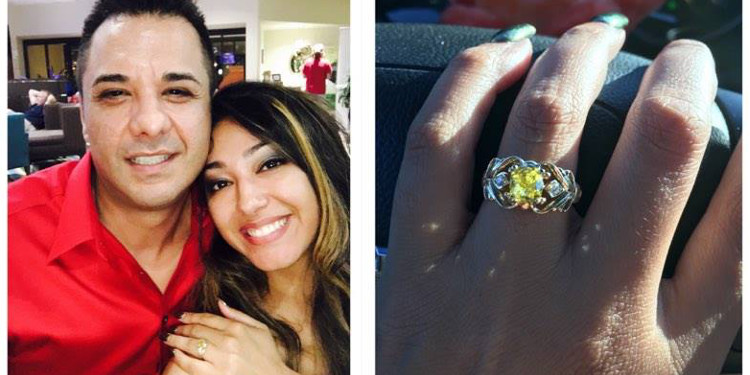 Torilla Factory frontman Alfredo Antonio Guerrero proposed to his girlfriend during his performance at the Texas Jazz Festival in Corpus Christi on Friday, October 21.

The singer dropped to one knee at Heritage Park overlooking the Corpus Christi bay to propose to his girlfriend, model Grace Escobar.

“This was a bittersweet moment in my life, ” Guerrero told TejanoNation.net. “I had just lost Charro Negro the week before so this was the first time I had ever hit the stage without my daddy, Tony “Ham” Guerrero, founder of Tortilla Factory and co-founder Bobby Butler a.k.a. El Charro Negro.”

Butler passed away on his 79th birthday on October 14 at his home in San Angelo, Texas.

“It ended up with joy and happiness in my heart, because I dropped on one knee in the middle of our show and a packed house in Corpus Christi at The Texas Jazz Festival right next to the ocean and proposed to my best friend who is the most beautiful lady in the world, with the most beautiful heart in the world…..Grace….Let the new adventure begin,” Guerrero added.

The wedding is tentatively scheduled for Rio De Janiero, Brazil, on October 22, 2018.  The wedding will include a performance by Shelly Lares, and groomsmen will include rapper Paul Wall, Sean The Jeweler and Warbucks Music President Randy Saenz.

Congratulations to the happy couple, who will say their “I Do’s” with Grillz on, according to Guerrero.