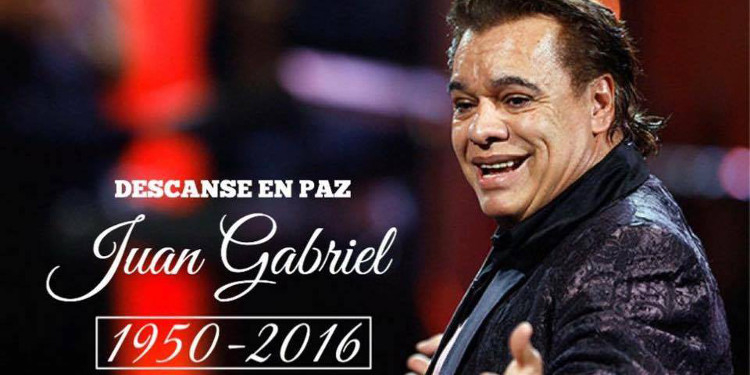 Legendary Mexican singer Juan Gabriel passed away from a heart attack at the age of 66 on Sunday, Tejano stars reacted via social media to the news.

Gabriel, a great international singer, composer, and entertainer, recorded over 25 albums, sold over 100 million records and composed over 1,500 songs. He was known for his ballads and mariachi songs, including the hits,”Amor Eterno” (“Eternal Love”), “Hasta Que Te Conoci” (“Until I Met You”), and “Querida” (“Dear”).

He was an influential icon to so many Tejano and Conjunto artists, who have recorded a large number of his iconic songs, and reacted to the tragic news of his death via social media.

“Deeply saddened to hear of the passing of Juan Gabriel,” Tejano star Stefani Montiel posted on Facebook. “A true icon, and musical genius, who has given us some of the most beautiful songs of our lifetime. He will be greatly missed, but I know his music and lyrics will continue to live on and inspire for many generations to come.”

“One of the best songwriters and entertainers of all time! Juan Gabriel May he rest in peace,” Tejano star Elida Reyna posted on Facebook.

“So sad,” Conjunto legend Linda Escobar posted on Facebook. “One of my favorites!”

“He was one of the greats in music,” Michael Salgado posted. “May you rest in peace my friend.”

“Latinos everywhere are mourning the loss of an iconic singer/songwriter,” 2015 Tejano Music Awards Best New Female winner Yvonne Ramos-Ybarra said. “His beautiful music is timeless and will forever live in our hearts…He had the voice of an angel and touched our souls with his melodies.”

“Very sad news,” Control vocalist and accordionist Jennifer Degollado posted in Spanish on Facebook. “You left your words, your beautiful songs and you showed the world your simplicity. You will never be forgotten.”

“Rest in peace Juan Gabriel,” singer Ben Ozuna posted on Facebook. “Such horrible news to hear. He was such a great singer/songrwiter!”

“I had the pleasure of enduring one of Juan Gabriel’s many shows as I was growing up,” Tejano Music Awards nominee Di Marie posted on Facebook. “He was an amazing entertainer and songwriter, may he rest in peace.”

“Another hard loss for our culture Mexicano,” two-time Tejano Music Awards nominee Angel Gonzalez posted on Facebook. “His music and legacy will live thru out history and beloved fans and whom he has inspired around the world will keep his memory alive with his music.”

“I am saddened to have read about Juan Gabriel,” singer Savannah Votion posted on Facebook. “I am a huge fan of his music, my dream was to meet him one day.”

“Another huge blow the music industry,” singer Leslie Lugo posted on Facebook. “I just recorded one of his songs, ‘No Lastimes Mas,’ that is coming out next week on a Laura Canales tribute album. I have sung so many of his songs! I can’t believe he’s gone!”

“Juan Gabriel, you will be missed,” singer Maria D’Luz posted on Facebook. “Thank you for all the beautiful music you left us with.”

“Today we lost yet another Latin music icon, Juan Gabriel,” 2015 Tejano Idol winner Monica Saldivar posted on Facebook. “May he rest in peace, as his leagacy lives on through the amazing body of work that he has left behind for us!”

Tejano Nation is saddened by the news of the passing of another music icon in 2016. Juan Gabriel will live on through his music to many generations to come.