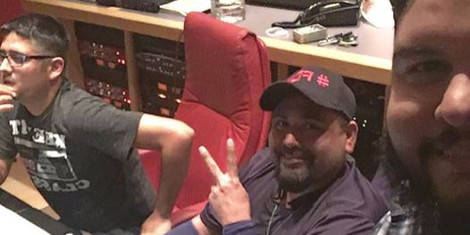 Lucky Joe is currently working on his third album and the 2014 Tejano Music Awards Best New Male Artist winner shared an Instagram photo of Masizzo‘s Johnny Lee Rosas laying down vocals for the the album.

“Who would’ve thought I’d be collaborating with one of our industries top guns,” Lucky Joe posted with the Instagram photo. “Thank you @johnnyleerosas it’s an honor to have you on our up and coming album! @grupomasizzo ‪#‎freddierecords‬ ‪#‎luckyjoe‬ ‪#‎grupomasizzo‬”

Lucky Joe has been in the Freddie Records studios in Corpus Christi, Texas, working on his follow-up album to his previous hit albums, Suerte and Muchacha Bonita.

The singer-songrwiter released “Pierdete (Love Yourself),” the first official single from this upcoming album, back in April. It’s a Spanish cover of the 2015 hit, “Love Yourself,” from pop star Justin Beiber.

The untitled third album from Lucky Joe will get a release date soon.

Who would've thought I'd be collaborating with one of our industries top guns. Thank you @johnnyleerosas it's an honor to have you on our up and coming album! @grupomasizzo #freddierecords #luckyjoe #grupomasizzo