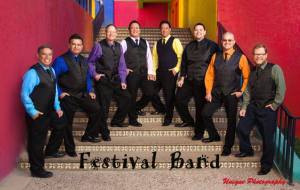 The motto: Live music without borders, is just what this band lives by. Festival Band is unique whereas they bring Tejano, Old School, R&B, and Top 40 to your dancing shoes. Festival’s objective is to play all genres of music to keep you dancing all night.

Festival was originally put together by Jesse Ortiz in 1981, however in 2002 the original band broke up. In June 2009, Festival was re-established by Danny Sanchez, his brother Eddie Sanchez and Rick Hernandez. Sanchez’s expectations for the band was to add some Funk, R&B, Old School and to just be a garage playing band. Skeptical band members joked about a Tejano Band playing Hip Hop. An obstacle Festival faced, was to find a singer who has the vocals to sing the variety of music. The first lead vocalist was Robert Grijalva who showed his versatility and sang for a few gigs. Then Aldaberto Gallegos III sang for a few months but had to leave the band for personal reasons. Still in pursuit for a vocalist, Bobby Valenzuela sang for a few years but left to pursue other interests. Finally, Grijalva returned to Festival and became the official lead singer. Three years passed by and in January 2016, Grijalva left to Texas to pursue his dreams. Following in the New Tejano Sound such as David Lee Garza, and Jay Perez along came the talented vocalist Abelino Sanchez and filled the void.

I presented a question to Hernandez, “What do you want your fans to leave with after seeing your performances.” He smiled and said, “Hearing someone say to me, I really had a good time dancing to your music.” Per Hernandez, that is the most gratifying and no better compliment. The musician stated he speaks for the whole band when playing the music, takes them and the listeners away from problems, it’s a get away from work, from all the bad in the World and its a way of expressing ourselves.

Members of the Festival Band include, Eddie Sanchez,( Danny’s brother )  who is the drummer and one of the founders of Festival. Scott Anderson plays the trumpet/ trombone/ keyboards and is a music teacher for the Sunnyside School district. Mike Suarez brought his stylish guitar skills. Mark Brugler added the bass, to add to the horn section is Joe Chavez, lead Trumpet Player. Danny Sanchez, who played keyboards but tragically passed away in April 2016 and now helping to fill in is John Sanchez (Abelino’s Father). Rick Hernandez on the saxophone and founder of Festival, as well. Last but not least Estella Hernandez booking agent, photographer, and Ricks wife.

What was emphasized by Rick Hernandez is that because of the brotherhood of all musicians they represent all the local bands in Arizona. Festival is humbled by all the support given to them by the fans, many supportive sponsors, and all the Radio DJ’s.

The most challenging part for the band is figuring out what the people want to dance to, what is the right mix of music so that the people enjoy themselves. The fans enjoy a particular signature song from Festival, it is the song “This Is How We Do It” from R&B crooner Montel Jordan, it’s always requested and expected to be played. As Robert Grijalva added , ” Festival does it like no body does.” 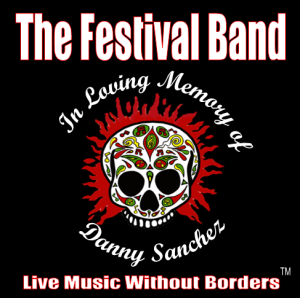 This year, the band suffered a heartbreak. The founder of Festival, Danny Sanchez passed away in April 2016. Danny’s dream was to make the Gran Baile in Vegas. He also expressed his goals, plus complete a CD. Reflecting on the many hours of practice, bonding together so that thru friendship and closeness, the music will be projected out to everyone who attends their gigs. Danny’s dreams are coming true as Festival is honored by Shelly Lares, David and Sarah Chavez to play at the Gran Baile on Saturday August 6th. Expect Festival to display their own original music but also to show their musicianship plus enhance the lead vocals by having Robert Grijalva and Abelino Sanchez to sing together. Original songs written by Joe Chavez, Rick Hernandez and a song in tribute to Danny Sanchez called Brohito written by Robert, Abelino and John will be show cased.

Excitement is building, anticipation is growing. Per Rick, this performance is for you all, the fans, the bands here in Arizona, all the wives and significant others of the Festival Band who have supported and loved us. Rick said,” The Gran Baile is for everyone who believed in us and for Danny Sanchez. Arizona is excited and proud of this accomplishment that Festival has reached and we all believe they have an Angel watching over them. Arizona is proud of you all, Festival!!