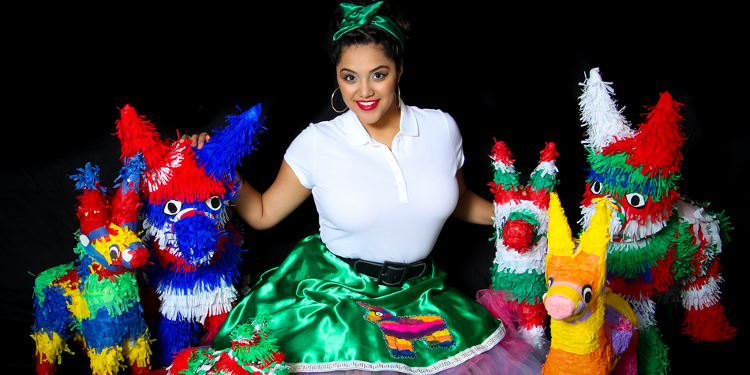 Latin singing sensation Veronique Medrano announced plans for a summer tour and clothing line during an appearance on the Domingo Live television show in Corpus Christi, Texas on Sunday.

The AMI Records Latin artist’s unique signature style is now available for fans in the form of her new fashion line TejanoBella By Veronique.

“I was nervous to get into the clothing business, but there is such a need for clothing that is appealing, vibrant and classic,” Veronique told Tejano Nation. “I’ve always tried to bring a sense of color and fun to the clothes that I wear at my shows, which I created from scratch. So with the fact that I’ve received so much inquiry to find items like what I wear, easily, I’ve decided to do a small batch of my designs and signature styles that anyone can feel like a TejanoBella.”

The first three designs will be released this March, including Zarape Crop Top, Conejo Ears Bandana, and TejanoBella Skirts.

The singer will embark on a summer tour that will combine two styles of Tejano and promote her upcoming album Mi Año Dorado.

“The Camino Clasico 2016 Tour is going to be exciting and by all means a show that will combine two styles of Tejano and make it an all-night baile,” Veronique said. “Myself, along with another well-known group are set to hit the road this summer. I’m excited to kick off my upcoming album, Mi Año Dorado, with such an expansive trip sharing our wonderful music.”

Promoters and clubs interested in booking the tour, should contact Norma Red at (956) 639-3440 to get the details on the show before the official poster unveiling at TTMA Fan Fair in March.

Get the latest updates on Veronique at her official Facebook page, Facebook.com/Veronique.Medrano.