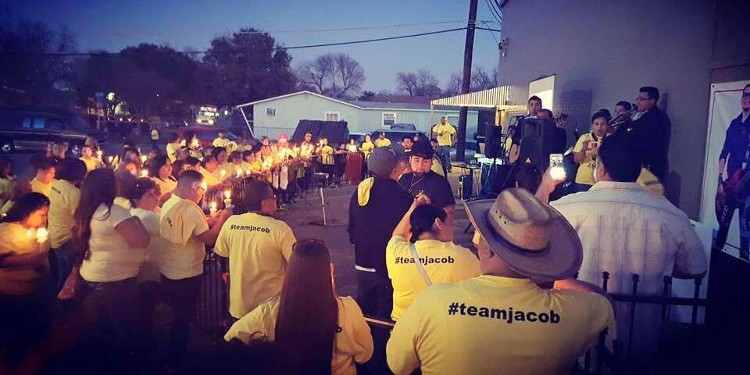 Turner, the 21-year-old son of Siggno lead vocalist and accordionist Jesse Turner, is still in a coma at a South Texas hospital after being critically injured from a one vehicle accident in the early morning hours of February 8 in Harlingen.

“Unfortunately it seems he was arguing with his girlfriend over the phone, texting and his mind was out of sight and he took a curve too sharp and he hit the guard rail at a high rate of speed at that point of course the car was very severely damaged and then it exploded,” Far West night club owner Rudy Lopez told KABB-TV.

Many fans, friends and musicians turned out for the prayer vigil wearing yellow shirts, a symbol of hope, with #TeamJacob to pray for speedy recovery for the musician. Tejano stars in attendance included Raulito Navaira, Stefani Montiel, Gabriel Zavala, Di Marie, Isabel Marie Sanchez, Jimencio, just to name a few.

“Our prayers are with the Turner family,” award-winning hitmaker Zavala posted on Facebook.

“He’s fighting for his life he’s very strong,” Yvette Cantu from Tesoro Music Entertainment told KABB-TV. “We’re asking everybody to continue praying and we want to go ahead and hear some good news.”

Turner’s father was told by doctors that there wasn’t much they could do for Jacob.

“When he arrived at the hospital the doctors told him there was nothing they could do for him, there was nothing they’d be able to do for him that he was pretty much gone already,” Lopez added. “I know that the power of prayer is very strong. The doctors might have said that he couldn’t breathe no more there’s nothing he can do but if God says that it’s not his time it’s not his time.”