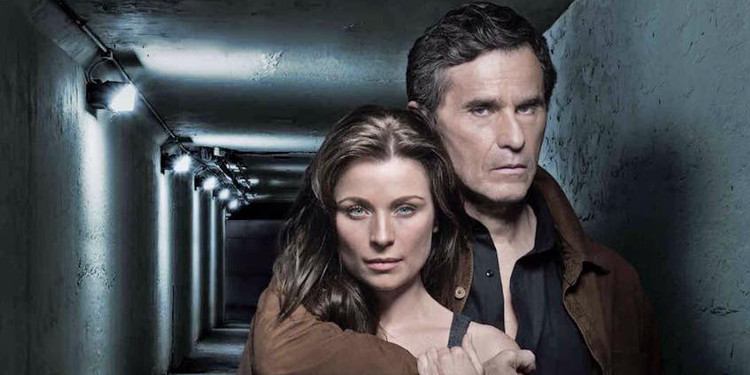 Well last night was the premiere of the new SuperMaxSuperSeries La Querida del Centauro and it was a relentless, inside look at the constant battles in law-enforcement between the GREAT Looking (Ludwika Paleta, Humberto Zurita and Michel Brown) and the Not-So-Great-Looking (everyone else).

First of all, speaking as someone with some law-enforcement experience, I am still stuck on the co-Ed prison experiment offered in this new series. I don’t think we have ever tried it here in Chicago, but things are so bad here right now that it might liven things up.

After all, who wouldn’t want to be arrested by Michel Brown?

If things go right during the “frisk” portion of the arrest, you can call it a “date”, especially if he interrogates you over cocktails.

Then, why not a coed prison??

Depending on where your interests lie, your next cell mate could be Ludwika Paleta or Humberto Zurita. And as long as you don’t touch Humberto’s salsa, you should get along just fine.

Humberto’s character is “El Centauro,” who we are told is not just “a Narco,” he is THE NARCO, or as they would say in Italy, “Narco de tutti Narcos.”

He does not seem like an unreasonable man unless you interfere with his delivery of Salsa.

If you make the mistake of interfering with his Salsa delivery, then you will promptly find your hand permanently attached to your table. With a fork.

Once you get past that quirk, Centauro seems fine. His extremely large prison cell is decorated like Hugh Hefner’s rec room. I’m not sure, but I think he wears something like a smoking jacket when he is lounging in his cell surrounded by his fans and henchmen.

I think that Centauro may not be as confident as he appears to be because he has surrounded himself with men that are very scary looking, so he can look even more handsome. This is a trick that he learned from Brides, who traditionally put their bridesmaids in the most hideous dresses that they can find, just to make sure that they are the most beautiful women in the room on their big day.

El Centauro’s bachelor pad, cool prison clothes, and Salsa dominance definitely make him the biggest catch in a co-Ed prison, and I’m looking forward to the tricks and gimmicks the female inmates get up to to attract his attention.

These women may have paid no attention to the rules of a civilized society (known as LAWS) which is what landed them in prison, but I know one set of rules they will follow: “The Rules,” which is a famous self-help book about dating, and how to land a husband.
Basically, the entire book is based upon a concept that is older than the Beginning of Time: Play Hard to Get.

To be honest, I’m not sure some of these co-ed prisoners have the option of playing Hard-to-Get with El Centauro, but it won’t matter because he has already fallen in love with Yolanda (Ludwika Paleta) the new Co-Ed.
Centauro was fascinated, watching her smart-off to an annoying guard, but when he saw Ludwika beat up the guard after an overly-intrusive frisk, Centauro was in love.

I already cannot wait for the Prison Wedding of Yolanda and El Centauro.

I love this new show already!!