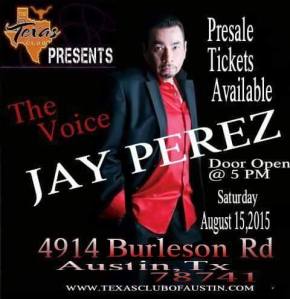 (AustinVida) – Tonight, the Texas Club Bar and Grill welcomes “The Voice” Jay Perez back to Austin.

The San Antonio superstar will return to the southeast Austin Tejano hot spot, bringing a catalog of hits not only from his solo career but also from his time as a Latin Breed frontman and lead singer for David Lee Garza y Los Musicales.

Perez is known for his ability to sing nearly every genre. He effortlessly switches from Tejano to Country to Soul, giving the crowd some variety at each of his shows. His cover of Soul standard “Me and Mrs. Jones” and his Country tune, “Steel Rain” are just two examples of his versatility. He is also known for his version of the unofficial Tejano national anthem, “Don Luis El Tejano,” recorded with the Latin Breed. A consistent hit maker with a strong fan base, Perez won Male Vocalist of the Year at the Tejano Music Awards from 2003 to 2010 before being unseated by Jesse Turner of Grupo Siggno in 2011.

Long story short: Classic Tejano by one of the masters, along with a few curveballs.

The Texas Club Bar and Grill is located on Burleson Road just south of Ben White Boulevard in southeast Austin. Cover charge is most likely $15 at the door. Doors open at 7 p.m. and 21+ are welcome. For more information call (512) 502-4197.