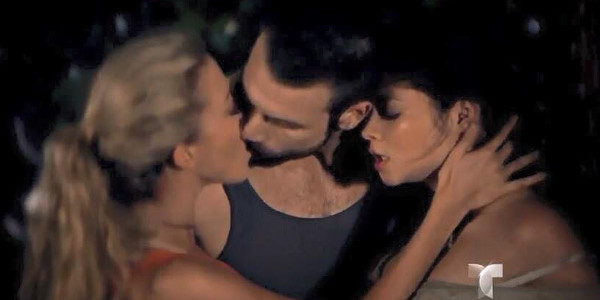 In the Musical Narco & Romance ChairsNarco Novela #ElSenorDeLosCielos3‬ on #Telemundo‬, allegiances and alliances continue to shift faster than a Chicago City Council meeting.

First, no one is more confused right now than La Condesa.

When Aurelio left El Don Feo’s ranch that he bought from El Don Feo, he was with LaMonikita, who he claimed was the love of his life.
They have been through so much together, and they each tried to kill each other at least once, which is the foundation for any great relationship.

El Señor and La Condesa are very attracted to one another but let’s be honest, they have a lot of catching up to do in the “I love You To Death” department.

THEN, El Señor returns to the ranch, I guess to measure the windows for new curtains, but is with La Esperanza, who he just met last week, and who he introduced to La Condesa as yet another love of his life.

How many “amors de mi vida” does this guy get?
He is more fickle than a 7th grade girl if you ask me.

Things may really break bad for El Señor if La Monikita and La Condesa unite against Esperanza, unless of course they unite WITH Esperanza (and El Señor) in a 4some, which would seem to be right up the alleys of Esperanza, Monica, and El Señor.
(The jury is still out on where LaCondesa stands on that issue. But so far no one ever seems to object when that happens.)

Meanwhile, while El Señor is prancing around decorating his new ranch and going to IKEA to look for beds that can accommodate at least six people, (and stuffing himself on the meatballs), his poor nephew Chacorta Jr (who I am convinced has been tricked into the Narco business), is stuck on the border of Colombia and Venezuela with a general who yells and sweats a lot, SuperJavi, and Lilo, who just seems to want everyone to get along.

El Chacorkita is on the Venezuela/Colombia Border because it is Ground Zero for Narcotrafficantes and The World’s Highest Rate of Inflation.

I think those guys like to hang out in that jungle because they can dress like GI Joe, grow ridiculous beards, and talked on those gigantic phones.