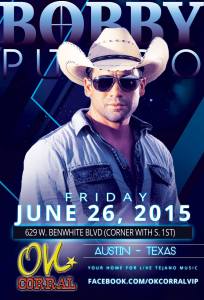 (AustinVida) – Tonight, OK Corral presents the return of Bobby Pulido to the Live Music Capital of the World. The Tejano and Regional Mexican heartthrob from Edinburg hasn’t played a solo show in Austin in quite some time and will be making his debut at the south side Tejano night spot much to the squealing delight of his hardcore fans.
Bobby, the son of beloved Tejano legend Roberto Pulido, first came on the scene during the golden age of 90’s Tejano with hits like “Desvelado,” “A Tu Lado,” and more. Since then, his fan base has continued to grow throughout the United States and Mexico as he has branched out into the Regional Mexican/Grupero market, adding elements of those genres to his trademark pop-inspired cumbias. His latest single, “Si No Te Hubiera Conocido” was released in May.

Long story short: Look for his biggest Tejano hits from back in the day and a club full of screaming female fans.

OK Corral is located at 629 W Ben White Blvd, at the southeast corner of Ben White and South 1st. The doors open at 8 p.m. $20 cover all night long. 18+ are welcome. For more information, contact OK Corral on Facebook.