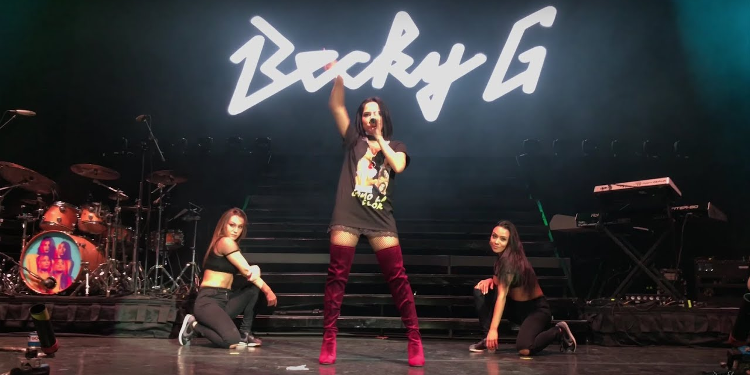 Latin pop sensation and actress Becky G, who was just named as a headliner at the upcoming Fiesta De La Flor music festival, showed off some sexy dance moves during a recent performance wearing a Selena t-shirt.

The singer twerked to her worldwide smash hit “Mayores” during a concert in Monterrey, Mexico in October 2017 and it was all caught on video.

Earlier this week, Becky G was announced as a headliner for Fiesta De La Flor, the two-day music festival in Corpus Christi, Texas that celebrates the life and music of late Tejano superstar Selena.  Becky G, who said she was influenced by Selena as a young girl and in her music, is scheduled to perform on Saturday, April 14.

Festival producers wanted more diversity in the performance lineup for the fourth edition of the music festival, that usually featured Tejano artists, but this year Becky G and country band The Mavericks were added as headliners.

“We are thrilled about the diverse music lineup for this year’s Fiesta de la Flor,” said Paulette Kluge, CEO of the Corpus Christi Convention and Visitors Bureau. “We look forward to another successful festival that celebrates our very own Selena and welcome visitors from all over the world.”

Becky G will definitely bring some diversity with her twerking skills to the Fiesta De La Flor stage.

See the full lineup and get more details on the 2018 Fiesta De La Flor at www.fiestadelaflor.com.