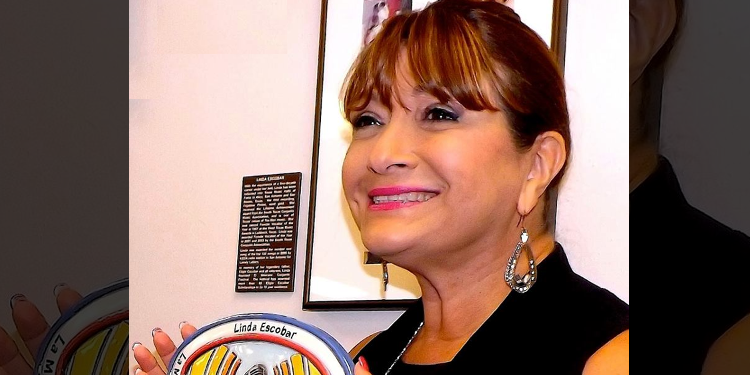 Tejano and Conjunto legend Linda Escobar was part of the 2017 class of inductees at the 6th Annual La Música del Sur de Tejas (the Music of South Texas) on Sunday in Corpus Christi, Texas.

An emotional Escobar talked about her passion for music and passing it on the next generation during her induction ceremony speech.

“To be honored for something that is my passion, I just can’t believe it, because it’s just my life. It’s been my life, it will always be life,” she said. “I want to leave something behind when I’m gone and that’s to encourage the children to continue our heritage, our music, our culture, and play accordion, play bajo sexto, play Tejano music. Keep it going, don’t ever let it die, no matter what, be proud of where you come from.”

Escobar’s career spans five decades beginning with her first hit “Frijolitos Pintos,” which became a gold record for the singer when she was just eight years old.  The song was co-written with her father, Conjunto legend Eligio Escobar.  For about 10 years, Escobar and her father toured across the United States, Mexico and Central America together.

The singer, who just turned 60 in August, has recorded many albums and has garnered many awards over her long and successful career.

In memory of her father, who passed away in 1993, and all veterans, Linda founded El Veterano Conjunto Festival. The November festival benefits the Eligio Escobar Scholarship Fund, established to help young children with musical talent in Conjunto music continue their education. The festival has awarded more than 60 scholarships in its 18 year existence.