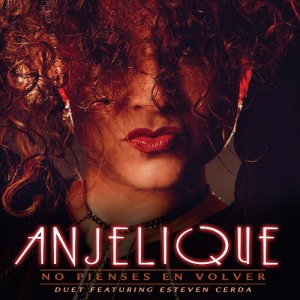 Anjelique released her latest single on Tuesday, “No Pienses En Volver,” a duet with former Those Guyz member Esteven Cerda.

The upbeat cumbia with a catchy melody, written by Cerda, mixes together the Tejano flavor of Anjelique and The Sweet City Band with Cerda’s accordion riffs, giving it a hint of a Regional feel.

“This was a song that was fun to record,” Anjelique told Tejano Nation. “When we laid the first tracks down in the studio it began to evolve all on its own. We hope to portray the musical diversity that Anjelique & Sweet City Band has with this song. Esteven and I have sang next to each other for years and we have fun backing each other up vocally. Also, even though this song is about ‘arguing in a relationship,’ I hope it brings the feeling of its okay to turn the page to the next chapter when it comes to being in an unhappy relationship. I’ve read before, ‘sometimes it hurts more to hold on than let go’.”

The track was recorded at San Antonio-based Slack Monster Studios with Severo “Sevy” Contreras of Texas Latino behind the mixing board, with production and guidance from Little Miss Dynamite herself, Shelly Lares and smooth melodious strings from Jimmy Garcia.

“No Pienses en Volver” is available on CDBABY, and will be available on iTunes, Google Play, Amazon MP3, Spotify, and many other digital distributors as well as her official website,  AnjeliqueMusic.com, soon.