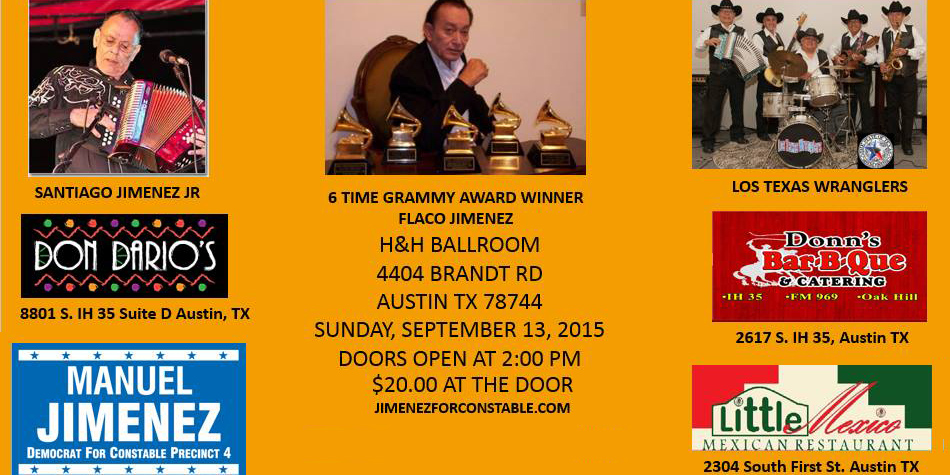 (AustinVida) – Today will be a day to remember in the ATX! H&H Ballroom will host a super-rare performance of the legendary brothers Flaco and Santiago Jimenez, along with Austin’s own Los Texas Wranglers!

Flaco and Santiago almost need no introduction. Flaco has won multiple Grammy Awards, and has recorded with everyone from the Rolling Stones, Dwight Yoakam, The Mavericks and more, in addition to his time with buds Doug Sahm, Freddy Fender and Augie Meyers in the Texas Tornados. Many consider him an ambassador for the Conjunto accordion sound.

“El Chief” Santiago Jr. is partial to the 2-row accordion and proudly carries on the traditional sound their father, Don Santiago Jimenez, began way back in the 1930s. A prolific songwriter and musician, El Chief has recorded over 70 different albums and has had his own record label, Chief Records, for decades.

Also performing are Austin’s own award-winning conjunto, Los Texas Wranglers. Led by Julian Limón Fernandez, the group features veteran musicians and female voices, is a hard-working conjunto with a loyal fan base that loves to dance to the group’s unique blend of country and conjunto music. Fernandez has won Austin Music Awards for Best Drummer, accordionist Mariano “Sonny” Trujillo has won in the Miscellaneous Instruments category, and the group has also won for Best Latin Traditional Band as well. The guys are also nominated for “Conjunto Album of the Year” at this year’s Tejano Music Awards.

Special note: this is a fundraiser for Manuel Jimenez, who is running for Travis County Constable in Precinct 4.

Long story short: A show like this doesn’t happen in Austin very often. Between the near-historic performance of the Jimenez brothers, who famously hadn’t performed together on stage in decades until 2014, and the feel-good down-home vibe the Wranglers bring with them everywhere, this is a must-attend event. Well worth the cover.

H&H Ballroom is located at 4404 Brandt Road, just east of I-35 and between Slaughter Lane and Old Lockhart Road in South Austin. Cover is $20 at the door. All ages are welcome and children under 12 are free. Doors open at 2 p.m.